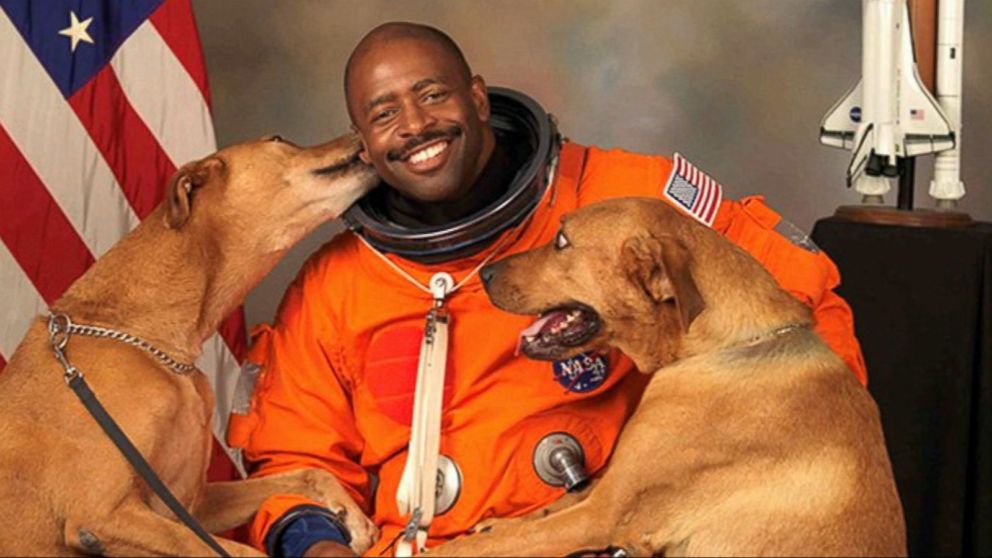 Leland Melvin spent many years as a NASA astronaut, and he has recently added viral sensation to his already lengthy list of accomplishments, but the road wasn’t easy for the lovable space explorer and host of Lifetime’s new Child Genius competition. As his official NASA photo featuring two face-licking, squirrel-chasing and undeniably loyal members of his family continues to circulate the Web, Melvin has also been sure to share a message about the true keys to success.

The 50-year-old space explorer captured the hearts and retweets of many when one reporter shared his official NASA portrait toward the end of January.

The photo not only shows Melvin sporting what he has deemed a “big cheeseburger smile,” but it also features his two rescue dogs happily jumping into his lap.

Adam Aton, the reporter who discovered the photo while researching the Challenger explosion, posted the image on Twitter and said he was in “awe.”

The picture was enough to solidify Melvin as one of the coolest astronauts in the world. His Twitter handle, however, is what sealed the deal for Aton.

“Also, his handle is @Astro_Flow,” Aton wrote under the picture.

The image garnered thousands of retweets in a matter of minutes, but for Melvin the photo didn’t seem that out of the ordinary.

Melvin explained that since he wasn’t married and his family lived all the way in Virginia, his two canine pals came along instead.

After years with NASA and exploring uncharted territories that doctors believed he would never be able to see, Melvin eventually retired just in time to accept his new gig with Lifetime.

His chipper spirit is apparent and that “cheeseburger smile” is hard to deny, but for a man who exudes joy, his journey was filled with major obstacles.

In fact, there was a time when doctors warned him that it was time to turn his back on any dreams of going into space.

After being drafted by the Dallas Cowboys back in 1986, a hamstring injury caused Melvin to switch his focus to his education and eventually working for NASA.

His sports dreams faltered, but his aspirations in the STEM field lived on as he underwent years of intensive training.

Unfortunately, history seemed to repeat itself when Melvin was critically injured during his final days of training.

At NASA’s Neutral Buoyancy Laboratory, which is a giant pool used to train the astronauts for space walking, one of the technicians forgot to place a pad in Melvin’s helmet.

This pad was essential to letting him clear his ears after he was submerged in the water.

“When I came out of the water, I was completely deaf,” Melvin said. “Blood was coming out of one ear; the doctor was talking to me, and I couldn’t hear anything.”

He eventually started to get his hearing back after spending three weeks in the hospital, but the doctors told him he’d never fly in space.

So Melvin decided to go to Washington, D.C., to work in NASA’s education programs, but that’s when tragedy struck again in 2003.

“That when we lost the space shuttle Columbia and all my friends,” Melvin said.

It also proved to be a turning point for Melvin, who would receive special recognition for his work inspiring the youth.

“As we went around the country for the different memorial services, the chief flight surgeon said, ‘I’m watching you clear your ears, and I see the good work you’re doing for this country trying to inspire kids and teachers,’ ” Melvin said.

It inspired the doctor so much that he decided to sign a waiver for Melvin to fly into space, The Huffington Post reported.

“You have to have grit,” Melvin said. “What was that thing that got you over the edge? Grit comes from failure.”

It’s one of the many messages Melvin reminds people of now that he has a major platform to reach the masses.

The key to success is to turn those struggles into passion.

Another key, he says, is to erase all barriers. Not just the barriers to enter a field or personal barriers, he says, but to lose the idea that there are barriers between people.

Melvin recalled his experience looking back on the Earth from outer space and said it changed his perspective on things.

“Then I looked back on the planet from the space station — there are no borders,” he told The Huffington Post. “It’s one blue marble spinning below you. And here I am working with people from around the world we used to fight against: the Russians, the Germans. We were breaking bread and working in harmony at 17,500 miles per hour.”

Melvin believes that sharing that perspective of the world as a borderless, blue marble could “shift” the way people see others and make people “want to do more good to save our civilization.”

During his interview, he also opened up about the importance of art even in the midst of STEM careers and how he, like many others in the STEM field, was inspired by Star Trek. Dr. Mae Jemison describes her journey from space-loving girl in Chicago to astronaut looking down on Chicago and thinking about her younger self.

Mae Jemison is a physician, engineer, educator, entrepreneur and the first woman of color in the world to go into space – she was a NASA astronaut for six years. Currently Mae devotes much of her attention to the 100 Year Starship, which she says is “pursuing an extraordinary tomorrow to create a better world today.” In her spare moments, Mae is a lifelong and accomplished dancer.

Source: NOVA’s “The Secret Life of Scientists and Engineers”